Shaw’s Crab House was where I spent the entire day.

The staff was awesome and the food well.. Hands down is the reason I spent all day there…

But that is not why I was there. See the buffet did not start until 5:00. I got there at noon.

My original plan was to get an appetizer and then unleash on some king crab legs. But we all know about the best laid  plans. I ended up ordering Buffalo Shrimp. 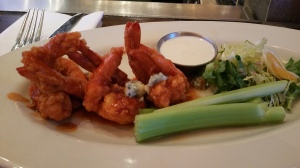 And of course, if it’s on the menu it has to get ordered. 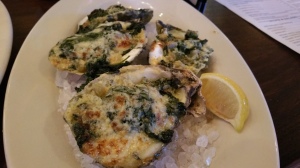 Most of that is actually oyster. I could have ordered blue tip oysters if I wanted. (Those are outstanding)

I was about to leave but then it started to rain.. Darn it.. So I guess I have to stay. I had Scott hook me up with my official new signature Bradley J drink and beer all in one, it’s the uniquely original. Some of my closest have had a preview already….. I’ll do a post on that one later.

With a little time passing I figured it was time to see what else was on the menu. 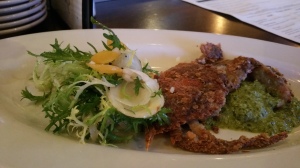 Due to the fact that I was sitting directly next to the sushi station, it would be flat out rude if I did not partake in a roll… or 4.  The Maki Combo… I have never had more amazing rolls in my life.

Spicy Shrimp, Salmon & Lemon Roll – Hands down the best roll I have ever had. Spicy shrimp, cucumber & avovado inside, salmon & lemon outside (yes you do eat the lemon, peel and all) 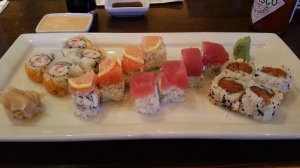 OK. The Spicy shrimp, salmon and lemon was by far the best because of the lemon on top. It was the perfect blend of citrus and acid needed to balance out the spice of the shrimp. Wow.

It was an amazing meal, and day, it is now 5:00 and no I did not go to the ultimate buffet.

Just when you thought it was over.. James (the sushi chef) said, “Hold on Mr. Johnson” 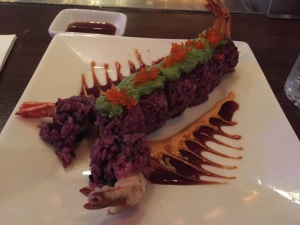 May I present to you… The Scorpion Fire roll.

Holy snikeys!!! Yeah.. I thought everything else was tasty.. WOW!!!

View all posts by bigbradleyj

One thought on “Having a Crabby Day”